Mysteries of the Old Photo Album (part 3): The Story of the Greeting Cards

A time forgotten is found again. Pete. Can I call you Pete? I know Mary did. I know while she waited for you to come home from the service, she called you Pete. After reading those letters and cards, and looking at those pictures, I feel like I know you more and more. Your service in the Navy. Your love for Mary and your little boy. WHERE did life lead you? WHY did your memories end up on a bargain table at a flea market.

I couldn’t leave them there.

And HOW did people not see the treasures inside. Pictures of you beaming with pride in your Navy uniform. Pictures of Mary. Pictures of your little boy. The letters we’ve spoken about already. Now, the greeting cards. The CARDS tell another story altogether. And if anyone bothered to peel open the cards, or carefully lift them off the weathered pages of the album barely stuck to those little black squares, they would have seen the OTHER messages Mary left to you in those early days of the 1940’s. I found them. A time gone by. YOUR time. Lost. Now Found.

That one card with a checkerboard blue and white faded fabric bow still tied to the side:

“this oughter make you better even if it’s junk”… and inside, this: “a crazy card and what’s it for.. well bet it helps to win the war”

When I carefully peeled the card back from the album, THIS message penned in cursive:

“Dearest Pete, I find I can spare three dollars right now and I know it isn’t much but it might help. You’d better get pen and paper and sit right down and write some letters to me, love Mary”

Then there was that other card saying, “while you recover from your operation”.

and in Mary’s cursive on back:

“Dearest Pete, I thought this card was cute. Hope you like it too. The guys sure teased me a lot today when I went back to work. They said I looked like I had a hard weekend. What do you think? Love Mary

one other card said simply “how ya doin’ sailor?” and inside Mary wrote, “Come on Pete, write a letter!”

There was that one card with little red elephants on it titled “about that letter I owe you”.. and inside the final line of the card “I will write soon, honest” to which Mary added in her own cursive, “I really am ashamed”

And one final one- the funny duck with the soft feather still attached after 75 plus years saying simply “Sick?” and inside Mary wrote, “sending you this card was Pepe’s idea. He picked it out and insisted on my buying it for you. Pepe & Mary”

I wonder what YOUR cards to Mary looked like. And how did you end up in San Francisco anyways. I’ve seen that small piece of fabric tucked into the album stamped “naval hospital, Pearl Harbor”. Did you suffer injuries in Pearl Harbor? Were you being treated for injuries at Ward 6 of the hospital in San Francisco where those letters were air mailed with the three cent stamps?

I’ve written now to media relations with the US Navy. I’ve also written to the Naval Historical Foundation hoping to uncover the missing pieces of your service.

Telephone numbers for relatives?
One was disconnected.
One was now a construction company. One had an answering machine!
Bingo!! I left a message and waited.

The nice man returned my call hours later and said he’d never heard of you.

In all fairness, I hadn’t either, until I picked up an old and worn and forgotten album. Now I can’t forget you.

From California to Indiana, looking to see where we can find your family, Peter Cherney, and reunite them with your history. 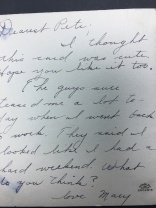 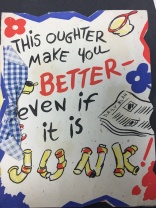 Author of Dadmissions. Pete Wilgoren is an Emmy winning journalist, blogger, and author writing about parenthood, life, and other stuff
View all posts by Pete Wilgoren →
This entry was posted in Uncategorized. Bookmark the permalink.

1 Response to Mysteries of the Old Photo Album (part 3): The Story of the Greeting Cards